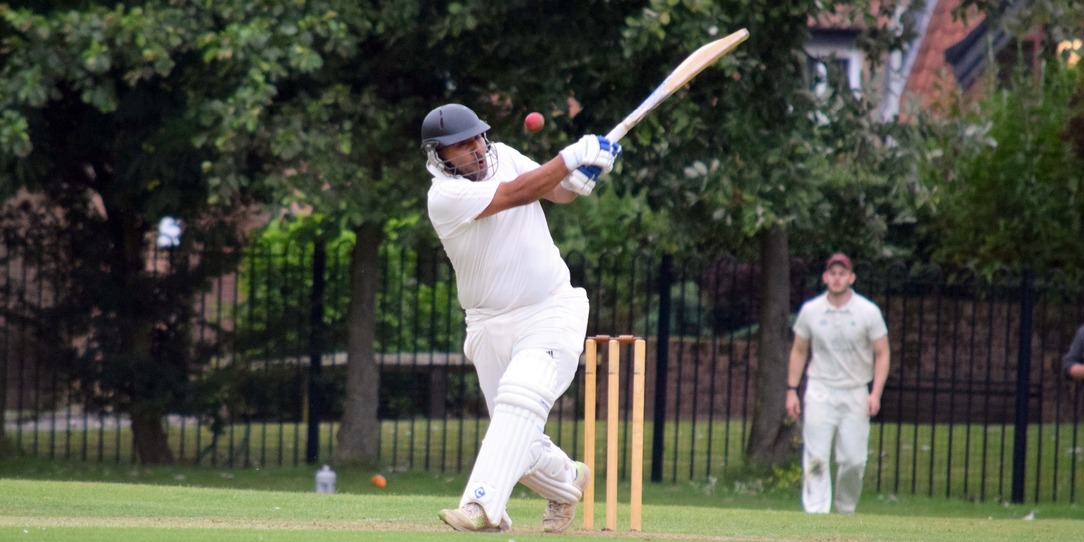 Posted on 15th August 2021 at 10:32
Nicholas Associates Premier division
Appleby Frodingham v Tickhill
Having elected to bat first at Brumby Hall, Tickhill lost their first three batsmen to Matthew Harris for ducks, and after Paul Hilton had weighed in with two more scalps, they had slumped to 41-5. But James Eaton and Pete Mawdsley then added 94 for the sixth wicket and helped their side reach a defensible total. It then looked a good total when Mark Cummins and Royston Dias took a couple of early wickets each and the home side were reeling at 23-4. But a fine unbeaten 72 from Jordan Cook, who shared in a 99-run fifth-wicket stand with the experienced Matt Morland, saw them to a victory that keeps the Steelmen’s hopes of a first Yorkshire Premier League title in their own hands.
Tickhill 177-8 (50) James Eaton 57, Pete Mawdsley 40, Matthew Harris 3-37, Paul Hilton 3-35
Appleby Frodingham 178-7 (48.5) Jordan Cook 72*, Matt Morland 50
Appleby Frodingham (12pts) beat Tickhill (2) by three wickets
Barnsley Woolley Miners v Sheffield Collegiate
Sheffield Collegiate claimed a sixth consecutive win to keep the pressure on the leaders. A second-wicket stand of 127 between Luke Shutt and Shaaiq Choudhry was the basis for their challenging 207-6 at Shaw Lane after electing to bat first. Choudhry’s fine unbeaten century was his first for the Abbeydale side. Five of Barnsley’s top six departed for single figures in their reply, and only when acting skipper Beck Frostick joined Ali Jahangir in a stand of 62 for the sixth wicket did the home side start to threaten a win. Sheryaar Ali then added support, but Henry Eldred and Stephen Cantwell returned to the attack to claim the last four wickets and leave the hosts 16 short.
Sheffield C 207-6 (50) Luke Shutt 58, Shaaiq Choudhry 105*
Barnsley WM 191 (49.2) Ali Jahangir 67, Beck Frostick 50, Sheryaar Ali 36, Henry Eldred 3-47, Stephen Cantwell 4-47
Sheffield Collegiate (12pts) beat Barnsley Woolley Miners (4) by 15 runs
Doncaster Town v Wakefield Thornes
Wakefield Thornes elected to bat first at Town Fields, but only Kieran Donnachie of their top six made a significant contribution, before he became Bilal Anjam’s second victim at 69-3. Thornes then slumped to 107-7, as Bilal took a further three wickets in a fine 15-over spell. Matty Taylor and Tom Froggett (16) then added 43 for the eighth wicket to take Thornes to a score they could defend. Two early wickets from Imran Mahboob helped Thornes reduce the home side to 69-4, and only when Bilal Anjam and Joe Gallagher (29) were together in a fifth-wicket stand of 30 did the home side threaten. But Brad Green and Danyaal Ahmed ensured that the visitors regained control and retained their fifth place in the division. It was Doncaster’s fourth consecutive loss, and they are not yet mathematically safe.
Doncaster T 162 (45.4) Kieran Donnachie 30, Matty Taylor 34, Bilal Anjam 5-47
Wakefield T 146 (49.5) Bilal Anjam 42, Brad Green 3-44, Daanyaal Ahmed 3-36
Wakefield Thornes (12pts) beat Doncaster Town (4) by 16 runs
Hallam v Elsecar
Hallam were looking for a fourth successive win to continue their bid for safety, but, having been put into bat by their visitors, were soon 15-3, with Moin Ashraf predictably amongst the wickets. Edward Haynes (18) and Joe Cooper (24) led a partial recovery to 58-3, but both fell to Oliver Blackburn and they slumped to 71-7. Harman Puni and Charlie Bourne (18) then added 54 for the eighth wicket, but a total of 144 never looked enough. However, two wickets each for Charlie Bourne and Robert Heyes raised hopes with the visitors 43-4, only for them to be dashed by Kashif Naved, whose responsible unbeaten 59 saw his side home, despite wickets falling at the other end. Elsecar retain sixth place, whilst Hallam now have tough games against Sheffield Collegiate and Treeton before their finale against relegation rivals Cawthorne.
Hallam 144 (48.4) Harman Puni 37, Moin Ashraf 4-39, Oliver Blackburn 4-52
Elsecar 145-7 (36.5) Kashif Naveed 59*, Charlie Bourne 3-33
Elsecar (12pts) beat Hallam (2) by three wickets
Whitley Hall v Treeton
The visitors were put in to bat at Baxter Field and whilst no batsman cut loose and made a big score, six out of the top seven passed thirty. The biggest partnership was that of 79 between Dave Rogers and Steve Foster for the first wicket. In this free-scoring innings, only skipper Neil Longhurst, with 3-20 off seven overs, came away with bowling figures he will want to remember. In reply, Longhurst and Matt Cartwright then added 36 for the first wicket, but Steve Foster and Vinnie Ogden were then chiefly responsible for reducing the home side to 108-8. With the contest effectively over, Sam Woodcock and Dan Waldron then added 79 for the ninth wicket, Waldron going on to dominate an entertaining last wicket stand of 43 with Rylee Parker. Treeton remain in third place, whilst Whitley Hall are comfortable in mid-table.
Treeton 264-7 (50) Dave Rodges 36, Steve Foster 37, Viraj Bhosale 33, Liam Johnson 48, Sam Drury 40, Greg Norton 39*, Neil Longhurst 3-20
Whitley Hall 230 (43.1) Sam Woodcock 70, Dan Waldron 65, Steve Foster 3-39, Vinnie Ogden 3-67
Treeton (12pts) beat Whitley Hall (2) by 34 runs
Wickersley Old Village v Cawthorne
Cawthorne’s overseas batsman Taruwar Kohli was the chief difference between the sides in a game that saw Cawthorne give their survival hopes a huge boost, whilst for the home side, defeat spelt the end of six seasons of Premier League cricket. Liam Wiles’ positive half century dominated the early proceedings, and when he was out, Kohli took over and hit a commanding unbeaten 110 in 86 balls, dominating an unbroken fifth-wicket stand with Kade Fletcher (23*). Ben Richardson (2-25 in seven overs) was the most impressive bowler for the home side. When the home side replied, opening bowlers Zeeshan Karamat and Josh Holling kept a tight control early on, after which only Jonny Younis, with an unbeaten 64 off 85 balls, held firm for the home side, and the result never looked in doubt.
Cawthorne 261-4 (50) Liam Wiles 58, Taruwar Kohli 110*
Wickersley OV 169 (44) Shahjahan Younis 64*, Michal Jepps 3-25
Cawthorne (12pts) beat Wickersley Old Village (0) by 92 runs
League tables