Congratulations to Appleby Frodingham and Sprotbrough on their Cup wins 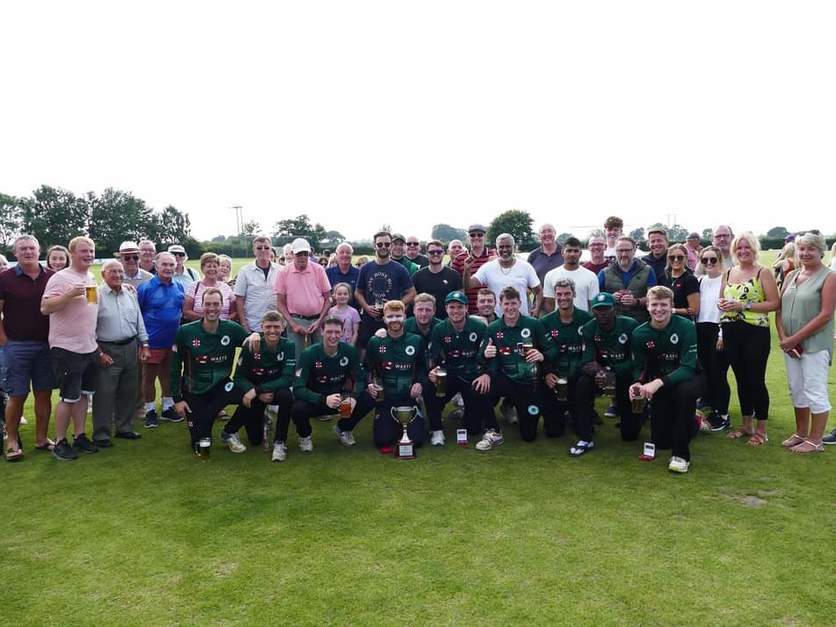 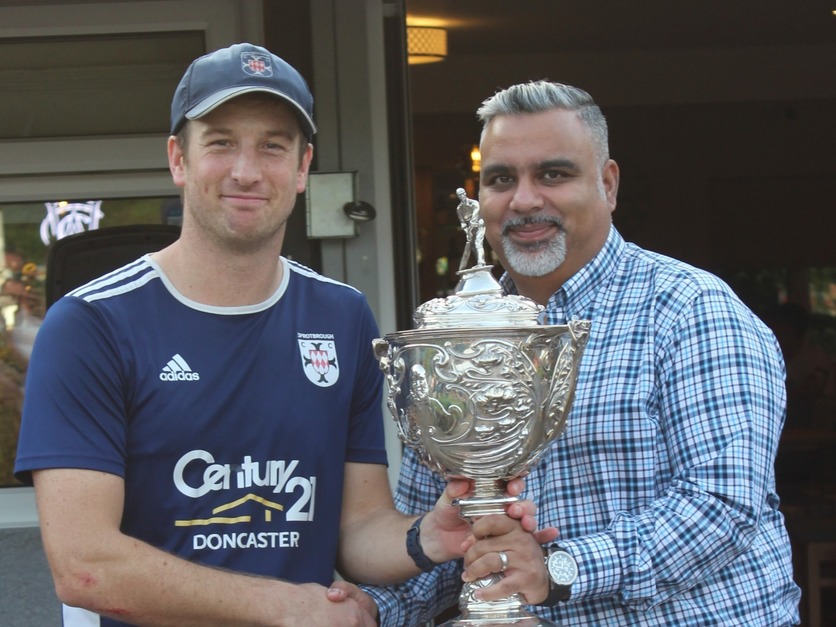 Sprotbrough captain Ash Ward receiving the ExtraCover Whitworth Cup from Imran Khan of sponsor Marshall Wooldridge
We congratulate Appleby Frodingham CC on winning the 2021 Viking Cricket Yorkshire Leagues knock-out cup and Sprotbrough CC on winning the 2021 ExtraCover Insurance Whitworth Cup!
Appleby Frodingham overcame Driffield CC in a surprisingly one-sided Viking Cricket cup final at Woodhouse Grange CC last Sunday. Driffield won the toss, elected to bat first, and were bowled out for 126 in the 27th over. The North Yorkshire side were soon 58-6, and only a mini-recovery, inspired by Randeera Ranasingha (27), helped them reach three figures. Man-of-the-match Paul Hilton took 3-11 in 6.3 overs. The result was never in doubt once skipper Matt Fowler (47) and Alex Grimes (20) had put on 62 for the Steelmens' first wicket, after which Kieran Lindley took over to steer them home by seven wickets, with an unbeaten 45 off 52 balls. Appleby Frodingham have now completed a treble of YCSPL Premier League Champions, YSCPL T20 Champions and Viking Cricket Yorkshire Leagues knock-out cup winners.
In the rearranged ExtraCover Insurance Whitworth Cup final at Wath CC on the same day, Sprotbrough beat Aston Hall by 39 runs after electing to bat first and amassing 213-3 in their 40 overs. Their total was founded on a brilliant second-wicket stand of 147 between Gordon Thomson (87) and Dean Williamson (78 not out off 85 balls), after which Williamson and Tom Kaye added 41 in the last four overs - the innings being characterised by excellent running between the wickets. In their reply, Aston Hall were soon 24-2, before Josh Coulson provided the main resistance from his side with 63 off 85 balls. He shared a fourth-wicket stand of 42 with Jared Lovell and 37 for the sixth with Johannes Bothma, to bring his side to 153-5, before man-of-the-match Ashley Langdale dismissed Bothma and mopped up the lower order with a devastating spell of 5-33 in 6.1 overs. Coulson was ninth out to Daniel Wright at 170, leaving Langdale to take the final wicket as the Green Lane side were all out for 174. Full scorecard.
We thank our sponsors Viking Cricket and ExtraCover Insurance, we hope that our clubs will support them, and that we continue our partnership with them both for many years to come. Many thanks also to Wath CC and Woodhouse Grange CC for their excellent hosting of the two finals.